skip to main | skip to sidebar

Here an example of the download statistics of Groovy 2.3.0 from bintray.com 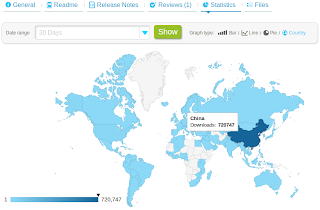 Why are we receiving so many downloads from China?


Since the creation of JFrog, every time one of our user was providing popular content and downloads, we get hit by huge amount of queries from China.
We tried desperately to find a pattern in theses queries. A faulty download manager, may be the agent name will tell us how to fix this, the pattern of action, and so on. We kind of find a way to stop this, but still every year something new appears.

For info, the pattern is extremely damaging to our servers. A robot of some kind is opening thousands of requests to download something, then starts to get the first few bytes, but immediately stops and keep the connection open.

The issue is that using smart tools on our side to find the above pattern, will block good traffic based on AJAX and long running REST API. Our products (Artifactory and Bintray) needs many parallel connections and long running HTTP sockets to work correctly. So, we are a lot more vulnerable than a standard web site.

Still, I keep thinking! Why people are creating theses robots? Why from China?

Than it hit me!

By running theses robots, they may force us to take the decision to complete block Chinese traffic to our servers. And if we do this, what are the consequences?

Chinese entrepreneurs will create the equivalent of our services inside the firewall. Then the services will run on data centers controlled by the Chinese government and under Chinese law. And we will not be able to complain or fight back.

At the end of the day, we are the bad guys! We unilaterally decided to block China!

Since the re-launch of extended enums I'm paying attention in my everyday coding (yes I still write code :) if extended enums will help me.
Here are 2 new examples:
1) I found out that most of the time the name() of the enum is not what I need. I need it to map an XML or HTML tag, an external ID, an entry name in excel or simple type name in a JSON object. So I write something like:

I could remove the getter, and the IDE helping a lot writing the boiler plate code but why? Here is how it should look:

The extra feature here is that the name() of the enum (ALL, INTERNAL, OR) is a constant that is not recognized as such by the javac compiler. So:

will not compile and so:

will for sure not.

But with extended enum you'll have:

2) Since extended enums also supports generics for enums, and I just have this issue associating also a long (ID) to an enums, you can now write:

With this, parsing definitions are a lot cleaner to write.
at 6:43 PM No comments:

A new push for extended enums!

At Devoxx09, Joe Darcy presented the status and future of the Coin project, and how changes to the language are selected and implemented (or vice versa). :)
During his talk, he showed the cost classification of a language change: trivial, small, medium, big, or huge, and emphasized the fact that each change is also a benefit (hard to measure a priori) that can be estimated as big, medium, or small.
So for example, the new loop syntax introduced in Java5 was a small change with big benefits—a no "brainer", let's do it!

However, in his talk he showed how "Extended Enums" were at least medium cost with a small benefit.

I started working on "Extended Enums" (previously "abstract enum") since the release of OpenJDK and the launch of the now defunct KSL (Kitchen Sink Language) in 2006. From the amount of hits this blog is getting on "extended enums", I know this issue is of big concern for many Java developers.
I developed a working solution, but stopped pushing for it for two main reasons:

So I talked with Joe Darcy at Devoxx09 about all the things I discovered implementing this change to the javac compiler (and other needed changes to the JDK classes). It was clear that the change is medium size, but I disagree that the benefits are small.
The benefits of "Extended enums" as implemented today:

From my point of view (and I think/hope I'm not alone), Joe Darcy missed the benefit point of the extended enum. It is a big benefit to the Java language.
This was and is my position for some time. What pushed me to re-launch "Vote for Extended Enums for the Coin project!", is of course Christof May from soplets.org (which setup the extended-enums site: http://www.extended-enums.org/), and the fact that I found a way to make the change a "small" one. Until now, I was sure that to implement this correctly a new flag was needed in the class byte code, and many changes to the Java type management were necessary.

So, if you are interested or want to learn more please check the extended enums web site: http://www.extended-enums.org/
at 3:35 PM No comments:

Frederic Simon
JFrog Ltd founder in 2008, and AlphaCSP founder in 1998 as chief architect. My development experience goes back to 1992, and I'm hooked on Java since 1997. My Open Source activity are with jfrog and setllarium4Java